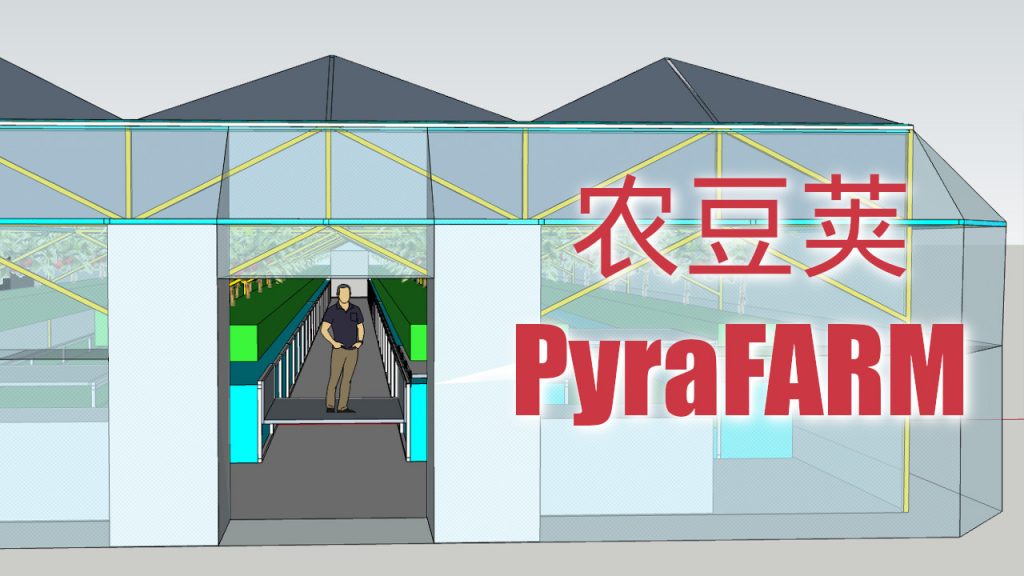 The text version is further down. I am working on the Chinese translation.

I feel like I have been “wandering 40 years in the desert” – but now, having created the super regenerative PyraFARM capable of restoring a right relationship between humanity and nature – the systematic resistance to adoption of this vital humanitarian innovation is gone. As inventor, I stand together with global co-creative teams on the threshold of the “Abundance Economy” where hunger is no more and we have the opportunity to “Make Poverty History”. I know this transformation to be within easy reach and accomplishment by action in global unison. Powered by natural sunlight, in any place and climate, the regenerative ecosystems within this PyraFARM will produce a plentiful harvest of organic food of the highest nutritional and health value together with abundant clean energy and pure water-from-air. What previously prevented progress, all resistance, is gone. PyraFARM is the breakthrough application of my patented SolaRoof Technology, which I have made available to everyone, everywhere for OpenSource collaboration and cooperative commercialization through www.PODnet.is the global POD enterprise network.

Furthermore, the PyraFARM capacity for producing the FEW essentials – Food + Energy + Water – in abundance has been established “as a fact”, validated within professional and academic circles, but this achievable human capability is not yet accessible to the common person. Why is humanity living in ignorance and suffering under the deception of authorities? It’s for the purpose of sustaining the warfare economy by which the “power-over” the many by the few requires the oppression of all by propagating the untruth of scarcity and the suppression of the truth of abundance, which if known, would set the people free.

Sustaining the lie of scarcity promulgated by those addicted to power-over people and planet, has had the karmic affect of sending humanity into a downward spiral, which over these same 40 years, has seen a doubling of human population concomitant with a near irreparable damage to the Earth’s ecosystems. In traumatizing people it would seem there is no limit, but the living Earth’s ecosystems are now at a point of imminent collapse and an extinction event is unfolding in real time. The untruths and conditioning have been impressed upon our consciousness by the educational system, while the ongoing exploitation and trauma to which all people, compelled to work in service to this System, are exposed, would seem to have inoculated it against any real change.

However, this System of power-over is hollowed out from within, it’s authority is questioned, it’s dirty energy is depleted and its grip on our lives is weakening, in fact, its hold on us is nearly lost. The American “dream” (the idol of materialism) is fading; it has become a horrifying present reality and we are waking up to the prospect of a future nightmare scenario unfolding. Yes, the vested interests and the powers-that-be will cling to their former authority, but their day is done – a new ”earth as it is in heaven” is coming. Should we by grace navigate the next few years and be spared from conflagration (conflict & nuclear winter), then there is hope for the reversal of the present order, when the last will be first; when the poor shall prosper and the peacemakers will bestow to their children the promised inheritance of the Kingdom of God on Earth. This transfiguration will be driven by Truth, revealing the Way to live in harmony with the whole of LIFE. Revelation (not revolution nor evolution) brings transformative action, brings uplifting of the human spirit, resulting in active hope – meaning capacity to put hands and hearts together to build on an upwelling of new knowledge that will set the people free from worldly domination; a freedom to thrive and prosper in universal peace and security.

Friends, the Abundance Economy is about to emerge out of emergency. Pandemic Emergency, Climate Emergency and multiple other crisis are overwhelming all resistance to the “reset” or “rebirth” that is the alternative to the downward spiral to destruction. No force can stop this process – but, is it protest & rebellion or creativity and solidarity that is urgently required? The worst of all choices is to be lukewarm, to be passive, to do nothing.

With obstacles overwhelmed and resistance crushed, rapid change can overcome all problems by the rapid, universal adoption of heaven sent solutions – for every wrong thing that we have been doing there is a right way to do these things, which we must learn. As we see, with the eye of the Holy Spirit and experience this new Way, putting what we learn into practice, we gain the clarity of hindsight as to how we collectively arrived at our current place of extreme jeopardy. Please read my paper “closing the hunger gap” that focuses on how our relationship with food and nature became so messed up and how to get it moving in a right direction. Change begins with a new relationship with food, which Kingdom Builders access by building a PyraFARM, which produces food locally, in the community – adapted to global heating, this is food, water and energy security for all – no family left behind.

A collective poverty consciousness is operating in the remnant of community not yet smothered by consumerism – but the near annihilation of Nature and our education in the ways of scarcity is a man-made condition (for our oppression), and when disproven and rejected, will not hold back the CoMissioners of change who are able, together, to mobilize transformative action that shall restore the natural wealth and wellness of each and every community participating in the Abundance Economy.

By all objective analysis this cornerstone, the PyraFARM, is able to end hunger, scarcity and take humanity beyond the limitations that are imposed on those who accept the “struggle for existence” as doctrine. Stepping outside of the limits of the patriarchal “man-made” world – the battle with nature ends – when we step into the sacred space of the PyraFARM we experience what it means to live in synergy with Creation: an atmosphere of bountiful natural resources creating an environment for regenerative growth that sustains a stable, productive climate assuring the universal success of all of humanity which births a new global Culture of plenty for all, of human dignity and peace. A PyraFARM is our garden of plenty, our fountain of living waters, our cornerstone of health and wellness. This is a Climate Change proof platform for building a 21st Century super-natural Abundance Economy (opposite the prevailing Consumer economy) that can heal the people and remove the weight of the human footprint on the neck of Nature, enabling natural biodiversity, and the restoration and rewilding of planet Earth.

The Kingdom Builders Mission launches with convergence on PyraFARM for the application of our vital humanitarian SolaRoof innovation for local fresh food, because of it’s singular capacity to save all of humanity from impending food system collapse and consequent die-off – half or more of humanity perishing by famine – and therefore it is our first step to empower all of us to pull up and out of the death spiral. This urgently requires learning by doing, being open to shifting our investments and transitioning our lives and economy from weaponry to livingry, from warfare to peace, from a Scarcity to an Abundance lifestyle. When families and communities everywhere engage in regenerative living; then, not some, but everyone will be released fully and finally from their captivity in, and mental slavery to the present System of domination – food sovereignty is the key – unlocking the sunlight powered PyraFARM is the way to throw off our subjugation by the dark powers that rule our world.